One of the coolest things about living in San Francisco, at least in my opinion, is the city's close proximity to areas of true wilderness. From the steel and concrete skyscrapers of the Financial District and bustling shopping mecca of Union Square, a landscape unblemished by the hand of man is easily within reach: the Marin Headlands, Mount Tamalpais, Point Reyes National Seashore, the Santa Cruz Mountains. From the white-noise, urban drone that hangs over parts of our city like a cloak of fog, the primal, untarnished voice of nature is never far away. The eerie howl of coyotes, the whisper of nothing but wind, the piercing screech of a raptor, the rumble of beach rocks being swept back underwater by a receding wave, the warning call of rattlesnakes and bobcats and Tule elk, the elusive hoot of an owl.

Or, in the case of the animal we're gonna discuss today, the noise something might make if it belched - really letting one rip - deep inside a rusty, 400-gallon steel drum. Oh, and in Dolby THX to boot.

Tucked away in a quiet, scenic but unremarkable stretch of the San Mateo coastline, less than 90 minutes south of San Francisco by car, one of nature's most outrageous wildlife displays is now underway. A drama, a love story, sometimes a tragedy and always a comedy: it's a Spectacular! Spectacular! starring some of the homeliest characters ever imagined, recorded in Surround Sound (Earthquake with Geneviève Bujold, anyone?), and staged on the sandy dunes and rocky point of land named Año Nuevo.


Behold mirounga angustirostris, if you will: the northern elephant seal. Truly something only a mother could love.


Eighty percent of an elephant seal life is spent at sea, but during the cold and rainy winter months thousands come ashore at Año Nuevo. In late December pregnant females arrive to give birth and nurse pups. The males, however - the BIG males, some of them weighing almost 2.5 tons, as large as an SUV big - are already there. They arrive first, stake out a prime claim on the beach and, of course, wait for the the belles of the ball: the, shall we say, Rubenesque females. Sexual intrigue ensues. And by March it's all over; some 1st year weaners remain, but most of the action has returned to life in the ocean.

Point Reyes has a colony elephant seals, as do several other sites on the California coast. That said, no place is more accessible and better for viewing than Año Nuevo State Reserve, and few have a larger population. For much of the year you can hike out to see the beasts on your own (they come ashore again to molt), but during the intensely competitive winter breeding season you need to snag a reservation for the 2.5 hour docent-led walks from the visitors center out to the colony.

Tuesday, January 17, 2012 was my third trip to Año Nuevo. Each visit was fantastic, fantabulous, unforgettable, but this most recent one was blessed with clear, sunny skies (walks go rain or shine, and my two previous ones were pretty cold and wet), plus had a surprise encounter with a big male sneaking up behind us in the dunes.

Here's a link to an iMovie I stitched together and posted to YouTube after my last trip.

Here's the link to a page with some official, scientific information on our population of elephant seals.

Whenever you're ready to schedule an outing, here's a link to the State Park website.

And now for my own cinematic review of the festivities: Why you should go. Now.

The drama: Watch two 6,000 pound males go at it. Watch the beach master try to defend his harem, his breeding rights, and tell me it not just as riveting as Spartacus on the Starz Network.

The love story: There's nothing quite like the sight of an alpha male violently coercing a much smaller female to mate. Even if she's ready.

The tragedy: Unfortunately, the mortality rate for newborns is high. Danger abounds, and infant elephant seals get trampled in the melée all the time.

The comedy: Just look at them. They may be skilled aquatic swimmers and hunters, but just watch them try to make their way on land. And what's up with that proboscis, that bizarre nose? Scientists still can't figure out the purpose of such an odd, ungainly feature, but perhaps Mother Nature simply has a wicked sense of humor.

So pack a lunch. Pack a water bottle and gloves and a hat and a rain slicker and an extra layer just in case. Make a reservation or take your chances. Who knows? I may see you out there, once more before the final screening this year.

Quick post to kick off 2012, but one with lots of pictures, detailing a newly improved hike within the San Francisco city limits. It's named the Batteries to Bluffs Trail (an offshoot of the Coastal Trail), and the two combined will lead you from the south end of the Golden Gate Bridge to the hills above Baker Beach.

The hike is not that long, just about 3 miles round-trip, and although there are a few significant ups and downs in both directions it's not that difficult. It is, however, right in our own backyard, and is accessible by car, on foot, by bike or by bus. If you're visiting or live in the northern part of the city you don't have to drive; simply make your way to the lovely Fort Mason District and catch the #28 bus west to the GGB (consult SF MUNI schedules and routes). Once off the bus - after you take in the impressive views on this side of the bridge - you want to find the paved bike path by the visitors center that leads under the roadway (not down to Fort Point).


The dirt track Coastal Trail starts on the outside of the bridge and heads south, passing some old military installations that you may want to explore along the way, and immediately offers spectacular views of the coast and the mighty Pacific, back toward the bridge and north to the Marin Headlands. The trail here is bit confusing (there's actually several footpaths lacing about the bluffs), but keep heading south and you'll soon see more signs.

Batteries to Bluffs officially opened in 2007, I learned, but the area is still a work in progress, especially at the beginning of the trek (still the Coastal Trail, I guess) where some construction gear competes with the natural beauty. Once past Battery Godfrey (est. 1895) the views open up to naked cliffs (pun intended), and the actual new trail begins. As it starts to descend you'll probably see some hardy park employees along the way, picking through the hillside bluffs in an effort to eradicate invasive plant species (hopefully avoiding the significant amount of poison oak). It's a massive restoration project, funded partly with generous donations to the GG National Parks Conservatory, but once finished the entire seaside will be cloaked in native flora. You'll recognize the park employees because they'll be wearing clothes. Yup, you're in nudie territory here.

The Batteries to Bluffs trail now allows hikers safer access to what's apparently called Marshall's Beach (hmm...been coming here for years and never knew that), the stretch of sand north of Baker Beach (part of which is also nude); when the tide's out the last significant beach before the Golden Gate rises above you.

The beginning of the Coastal Trail seems like it's gonna be wheelchair friendly when it's finished (albeit ATV wheelchair - LOVE California!), complete with access to an impressive, state-sanctioned lookout point just before the stairs begin. At the nadir of the descent, at the spur trail to Marshall's Beach, there is a newly unearthed natural spring that gurgles down from the hills above. I don't know the name of the spring (or if it even has one), and the surrounding earth is a bit raw right now, but it's a welcome surprise nonetheless.

Time to climb. It's not that strenuous, but it is up. Up to some more beautiful views and rugged coastline, ending soon with a postcard perfect perch above that gorgeous crescent of urban sand: Baker Beach.

(FYI. When the tide is nice and low, and should you crave some real risky and risqué exploration, at certain spots you can get beachside and wend your way (i.e. bolder hop) along the coast at waters edge, keeping an eye on the ocean at all times. Be forewarned, tho: it's dangerous, not recommended or sanctioned, and the wildlife can, in fact, be wild.)

The Batteries to Bluffs trail rejoins the Coastal by Battery Crosby (est. 1900). Here you can sit a spell and admire the view, or continue on and access the log steps down the dunes to Baker Beach proper for a picnic (beautiful sand and surf, great people-watching, picnic tables and restroom facilities). And should you desire an all-day trek you can continue walking the rest of the Coastal Trail to Land's End, Sutro Baths, the Cliff House and Ocean Beach (another 2 miles). Or you can turn around and retrace your steps.

Any which way you're gonna love it.

The following pics are from September 2011. As you can tell many are with the Golden Gate Bridge in the background, but the views are so spectacular and so rewarding from this vantage point that I had to include them all. 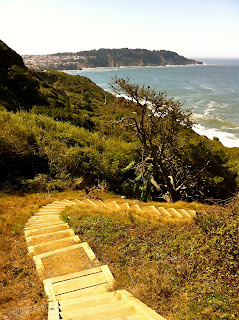 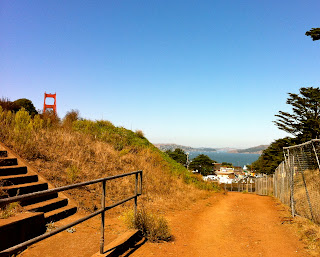 A short video from September, taken from the rocks by Marshall's Beach.


These are from a recent visit in January 2012. Weird weather; more like our glorious month of February, because January is usually rain, rain, rain. Don't know what's up with Mother Nature this year, but we'll see. 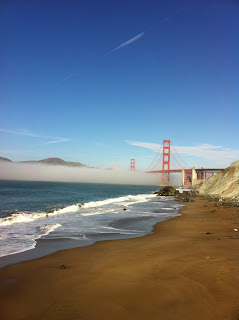 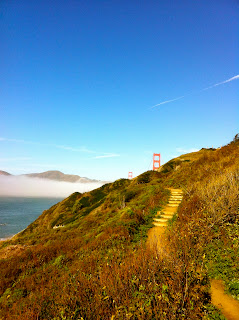 
The following pictures are from Land's End (Sutro Baths, the Cliff House and Ocean Beach), which is another 2 mile hike from the south end of Baker Beach. For visitors without a car (and city dwellers alike), a grand day out might include this itinerary: hop on the #38 Geary bus to the end of the line at 48th Avenue, spend a few hours exploring Land's End, then hike all the way back to the Golden Gate Bridge, where you can pick up the #28 bus to Fort Mason in the city (or do it in reverse). 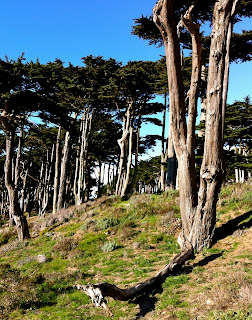 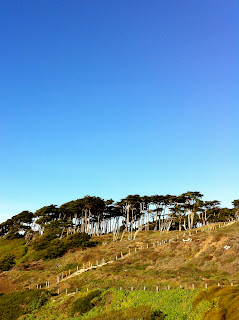