That I've lived in San Francisco for almost 24 years but had never, until last Friday evening, stepped aboard the 63-foot sloop named Ruby for a sunset bay sail is kind of a mystery. To me, at least. That when I finally did go I went with friends of mine who actually know the captain - who have known him for many years and have sailed on the Ruby countless times - certainly makes sense, but that it took so damn long is downright bizarre. To me, at least. You see I've often heard them mention the Ruby, and from the dining room at Waterbar I watch the boat glide by every evening as I stand table-side opening wine, but for some reason...well, I just don't know.

I love the ocean. Love the San Francisco Bay, love being out on it, and am always telling visitors to get out there as well. In the past my advice to them has been to catch the Blue + Gold Fleet from Fisherman's Wharf for an hour-long ferry cruise out the Golden Gate and back. In the future I'll still mention that as an option, but from now on I will also recommend (highly) the Ruby.

The Ruby was built by Captain Joshua Pryor in the late 1970's. It took him almost five years. She's a 63-foot long auxiliary sloop (no idea what that means) with a 13.5-foot beam, a 60-foot mast, and a 7-foot draft. When it's not sailing up and down the coast of California the boat is bearthed on the southern San Francisco waterfront, down by Pier 50. Waiting for you. For your friends, for your family. Or, should you desire, for both.

And following are some pics from our sail. It was luckily an exceptional evening for a bay cruise (not all are so clement, but in October the chances are good), with tee-shirt temps even facing the Golden Gate, light winds, at times startlingly calm water, and a blindingly spectacular sunset. 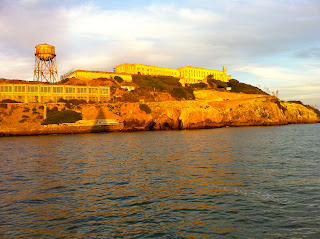 
Few more pics, on the return trip to the dock. 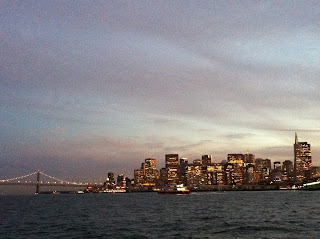 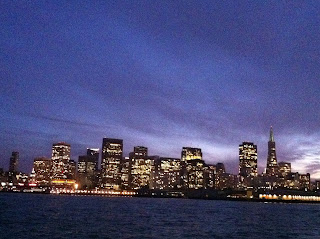 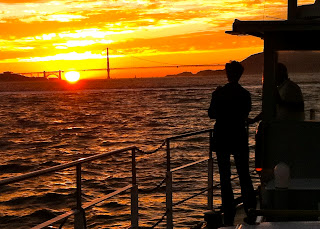 So do yourself a favor, people: Sign onboard the Ruby. Captain Josh loves to hoist the sails. When he does, when the drone of the diesel engine is replaced with the whisper of wind, the flutter of the mainsail, the ping of rigging against the mast and the lap of waves, you will be transported. You'll see the skyline, the Financial District, Fisherman's Wharf, Alcatraz Island, Angel Island, the Golden Gate, the Marin Headlands and the San Francisco Bay like no land-lubber can. Plus, when you return to terra firma you can have dinner at The Ramp, a perfectly raucous bayside eatery right where the Ruby docks.

Who knows? I may just see you there.